Pomegranate – a symbol of abundance and fertility for many cultures, a source of health and food for centuries, the inspiration for many works of art, the “fruit of the dead” from the blood of Adonis; the forbidden fruit in the Garden of Eden with which Eve seduced Adam … All this and much more is hidden behind this wonderful fruit, which is a real treasure trove of health. 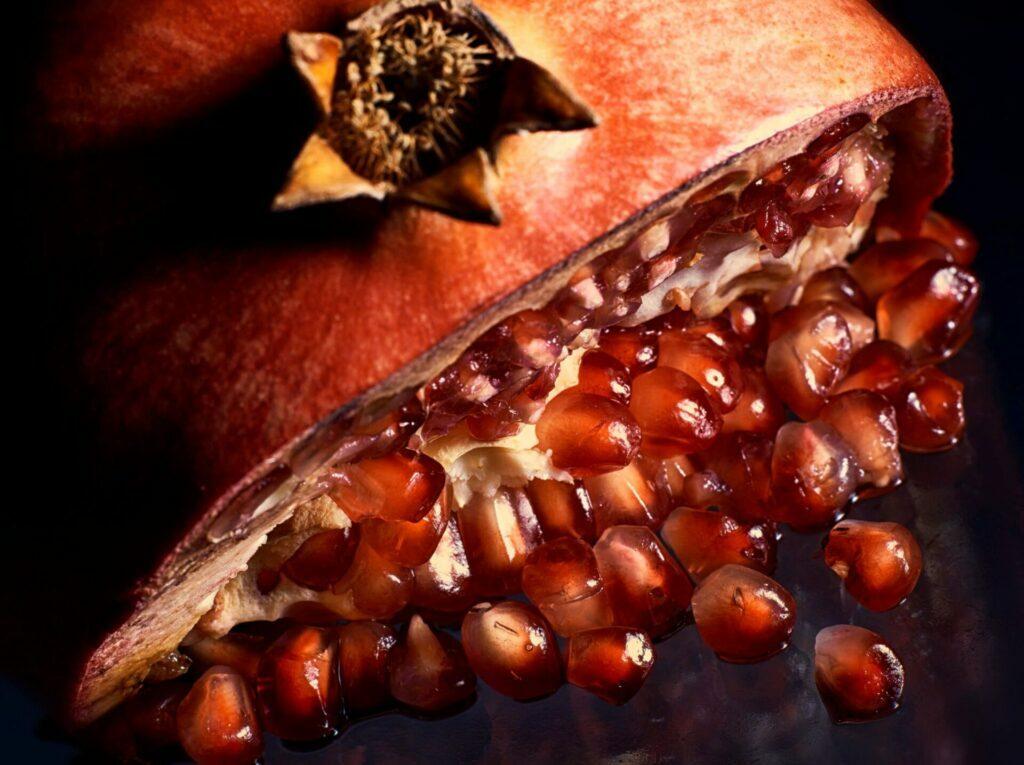 Punica granatum is a fruit-bearing deciduous shrub  that grows between 5 and 10 m (16 and 33 ft) tall and is extremely long-lived, with some specimens surviving for 200 years.  Pomengranate forms beautiful red flowers , therefor it is planted in home gardens. The homeland of the pomegranate is Persia. It was brought to America in the late 16th century by Spanish colonialists. Pomegranate is grown throughout the Middle East, North and tropical Africa, the Mediterranean area, Central to Southeast Asia, India, America and Australia.

Red-purple in color, the pomegranate fruit husk has two parts: an outer, hard pericarp, and an inner, spongy mesocarp (white “albedo”), which comprises the fruit inner wall where seeds attach.  The number of seeds in a pomegranate can vary from 200 to about 1,400.

It is used for cooking, prepared drinks, smooties, ​​cocktails and alcoholic beverages, as an addition to dishes …

When you cut a pomegranate with a knife, it is necessary to separate the seeds from the inner core. Separation of seeds is easier in a container of water because the seeds sink and the inedible pulp floats to surface waters. Alternatively, freeze the fruit deeply. In this case, the seeds are easier to separate. Alternatively, you can halve the pomegranate, hold it half over the bowl and scoop it out with a spoon. Count on your kitchen to be a little embellished with red. Pomegranate juice can be sweet or acidic. Elagitannins give an acidic taste. 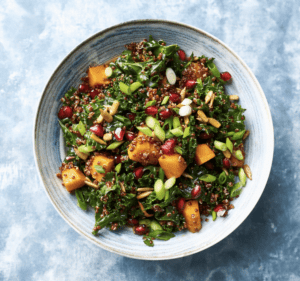 Pomegranate - for the health

Pomegranate is a rich source of antioxidants, so it is attributed too many anticancer and anti – inflammatory effects, and some recommend it as a supplement to conventional therapy for cardiovascular disease and some forms of cancer. Studies in mice have shown that the addition of pomegranate or pomegranate juice significantly improves the condition of atherosclerosis, has anti-inflammatory effects and lowers blood pressure. The first laboratory studies thus served with promising results, which now need to be confirmed or refuted by clinical studies that will show whether potential positive effects can be expected in humans as well. Be careful with various food products that promise miracles. These are exclusively dietary supplements that strengthen the immune system and thus have a supportive effect on the body.

Why is pomegranate extract so great for the skin?

Pomegranate seeds contain 22% oil. Pomegranate oil is very special due to its composition. It contains punicic acid, also known as omega 5, which makes up 80% of triglycerides. This rare fatty acid from all plant sources is found only in pomegranate seed oil. It has strong anti-inflammatory properties and is an excellent antioxidant. Pomegranate is one of the best plants with anti-age effect in the world. The oil contains 17 -alpha-estradiol and estrone-phytoestrogens, which have a positive hormonal effect on the skin. The oil has excellent rejuvenating effects. It removes free radicals, thus slowing down skin aging and promoting collagen formation. Due to gallic and egalic acid, it repairs skin damaged by the sun. In laboratory research on cultures of human and animal skin cells and tissues, it has been shown to have antioxidant, photoprotective, anti – inflammatory and antitumor effects. The oil is rich in vitamin E.

Due to all these properties, the use of pomegranate oil is recommended for the care of mature demanding skin, dry and prone to allergies skin, for burnt skin and as a care after sunbathing.

Pomegranate oil alone is extremely unstable and has a very short shelf life, so when formulating luxury natural cosmetics, we use organic CO2 extract, which has a significantly longer stability and no unpleasant odors.

Did you know that we need more than 500 kilograms of pomegranates to produce just one liter of oil?

Pomegranate is mentioned throughout history from the Late Bronze Age in the area of ​​today’s Mediterranean (Mesopotamia, Turkey, Cyprus …), along the famous Silk Road in China to Kandahar in Afghanistan, which is known for its exceptional quality pomegranate. Although  not native to Korea and Japan, the pomengranate is widely grown there.  It is widely used for bonsai because of its flowers and for the unusual twisted bark the older specimens can attain. Spanish colonists later introduced the fruit to the Caribbean and America (Spanish America).

Pomegranate seeds are used as a spice known as anar dana, in Indian and Pakistani cuisine. Dried whole seeds can be purchased at the Indian market. The seeds are separated from the core, dried for 10 – 15 days and used to acidify chutney and curry.

Before bringing tomatoes to the Middle East, pomegranate juice, molasses and vinegar were used to prepare Iranian food. They are still found in traditional recipes such as fesenjān, a thick sauce made from pomegranate juice and crushed walnuts, usually as a souce over a duck and other poultry and rice, and in ash-e anar – pomegranate soup.

You can find out more about which cookies we are using or switch them off in settings.

This website uses cookies so that we can provide you with the best user experience possible. Cookie information is stored in your browser and performs functions such as recognising you when you return to our website and helping our team to understand which sections of the website you find most interesting and useful.

Strictly Necessary Cookie should be enabled at all times so that we can save your preferences for cookie settings.

If you disable this cookie, we will not be able to save your preferences. This means that every time you visit this website you will need to enable or disable cookies again.

This website uses Google Analytics to collect anonymous information such as the number of visitors to the site, and the most popular pages.

Please enable Strictly Necessary Cookies first so that we can save your preferences!